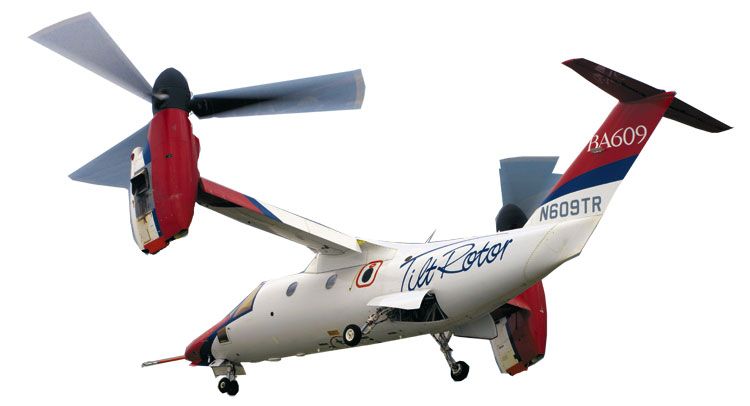 As an aerospace engineer you rarely get to take an idea from a blank sheet of paper to a completed, flying aircraft," says Tom Brooks, Principal Engineer at Bell Helicopter Textron. Brooks and his colleagues at Bell Helicopter were presented with that opportunity when they designed and built the BA609, the first and fastest commercially available tiltrotor aircraft in the world. Click on image to see enlargedview.

Combining the vertical take-off and landing capabilities of a helicopter with the flight capabilities of a turboprop, the BA609 is unlike any civilian aircraft the team—or anyone else—has ever developed. As a result, the BA609 engineering team began with many more questions than answers. How could they be sure that the system would perform as expected prior to test flight?

Could they build in sufficient redundancy to satisfy stringent safety and flight requirements? Could they keep the empty weight low enough to satisfy the range needed to reach remote oil platforms in the North Sea and Gulf of Mexico? Could a civilian tiltrotor provide a cabin quiet and smooth enough for executive transport?

To tackle the unknowns, the BA609 development program focused on extensive modeling, simulation, and analysis. Before the first liftoff the BA609 had already undergone several design iterations based on more than 1,000 hours of piloted testing in the BA609 simulator and iron bird facility. 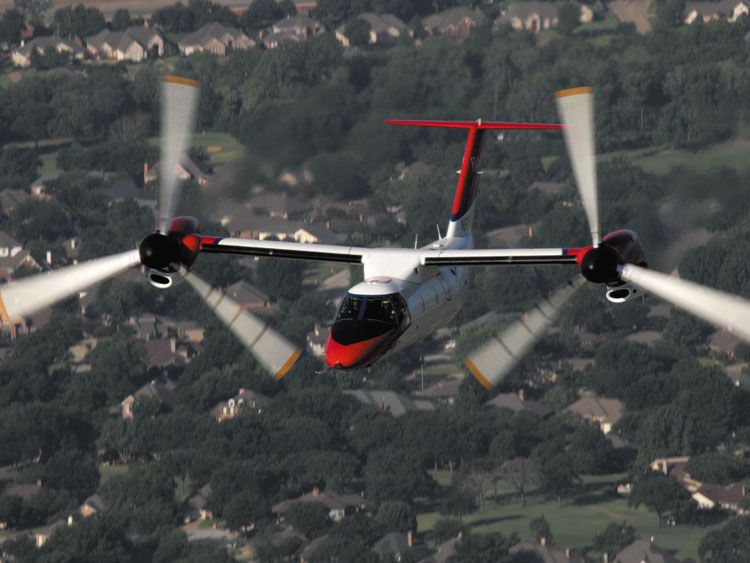 The BA609 flying in airplane mode. Click on image to see enlarged view.

While the BA609 is designed for medium-sized fixed- and rotary-wing transport operations, it has a wide range of potential missions. As a result, design requirements were stringent and extensive. The BA609 would have to provide the necessary vertical lift, speed, altitude, and range while ensuring excellent conventional response handling and minimizing pilot workload.

Once the requirements were defined, Bell systems engineers began the system and functional analysis phase. Simulation played a critical role at this early stage, enabling the team to evaluate different aircraft configurations in architecture trade studies.

Starting with some very basic assumptions, the team used Simulink to model and simulate high-level characteristics of the BA609 and its flight control system (FCS). They then simulated the model to evaluate different aircraft configurations. David King, BA609 Analytical Integration Leader, points out, "To reach aircraft configuration decisions effectively, you must use an iterative approach. The ability to make rapid changes and simulate them quickly using Simulink was a big advantage for this kind of rapid prototyping."

King and his colleagues performed complex analyses of structural components and control algorithms. In one case they evaluated the effect of turbulence on the BA609’s barbell-like weight distribution. With its engine masses positioned at the wingtips, the BA609 has multiple aeroelasticity modes (states that maintain structural stability under varying aerodynamic loads). Bell engineers built filters into the FCS feedback system to dampen oscillation and ensure a sufficient stability margin when the aircraft encountered turbulence. Using MATLAB and Control System Toolbox, they developed and implemented the filters and generated expected filter output for use in future verification tests.

Bell Helicopter provided their suppliers with working Simulink models in addition to standard requirements specifications. These models helped them communicate requirements to suppliers while enabling the suppliers to test their software more effectively before delivering it to Bell.

Generating Code for Test and Certification

Simulation played a key role in the system testing of the baseline FCS code. From the models they used for simulation, Bell engineers automatically generated FCS code using Real-Time Workshop. By comparing results from the automatically generated code with the code running on the flight control system hardware, they verified and validated system behavior before conducting flight tests.

The Simulink models showing the functional aspects of the software will be part of the package that Bell submits to the Federal Aviation Administration for DO-178B level A certification of the BA609. King says that the Simulink models and automatically generated code will provide an additional advantage: "To satisfy the DO-178B verification requirements for level A, we need an independent version of the flight control system that processes inputs and produces actuator commands. The code we automatically generate using Real-Time Workshop gives us an independent version to meet that requirement." 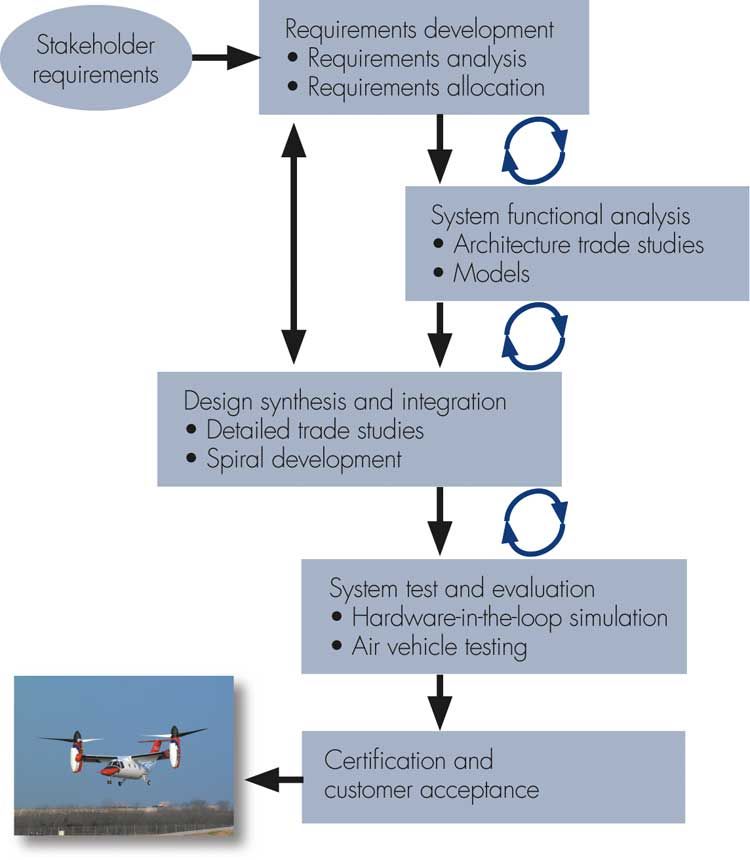 The systems engineering process for the BA609. Click on image to see enlarged view.

Testing the FCS on the Iron Bird

The BA609 team used Simulink and Real-Time Workshop to create a complete hardware-in-the-loop (HIL) testing environment that incorporates a physical model of the BA609. The "iron bird" enables test engineers to evaluate the real-time capabilities of the FCS. Just as importantly, the HIL test rig lets pilots work with the actual controls and interact with all the key flight systems from the cockpit.

Pilots "fly" by viewing simulated displays and operating real controls, including real stick and force-feel systems. Stick movements send fly-by-wire signals to the FCCs to move the actuators. The simulator then computes airframe aerodynamics, engine dynamics, and other metrics before sending feedback to the FCCs via sensor inputs.

Pilots use the iron bird to train on the system before flight tests. Bell plans to use a similar system to provide training for civilian pilots. A high-fidelity simulator, which pilots can use to attain a BA609 Type Rating, must simulate everything from aeroelastic properties to weather and runway traction.

"It’s a big task," King says. "The simulation development work using MathWorks tools will be a big part of it." 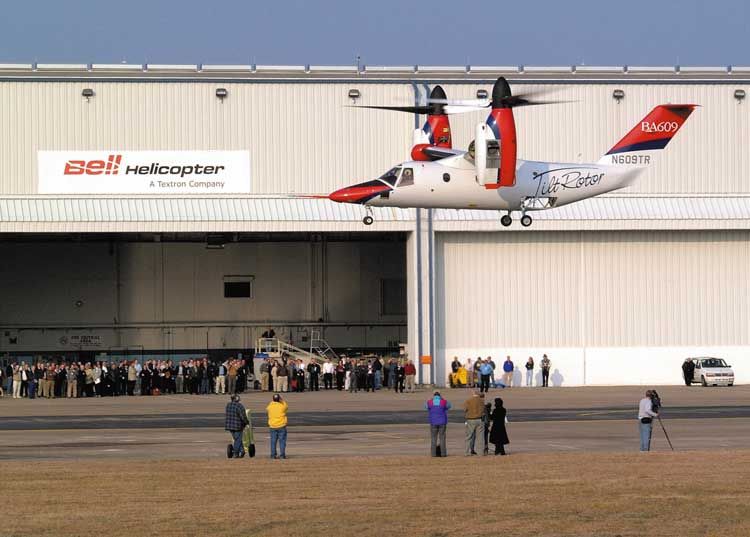 One morning in March 2003, King, Brooks, and their colleagues sat in the telemetry room at Bell’s Flight Research Center in Arlington, Texas. Starting with little more than a blank sheet of paper, they had designed, modeled, and simulated the first civilian tiltrotor in the world. They were about to watch it take flight.

The confidence the team had gained through rigorous simulation enabled them to remain relatively calm—at least until the BA609 lifted off. "I was amazed at how stable it was," Brooks remembers. "For me it was a unique moment. I had never been part of a program that started from scratch and went to flight like that. ‘Thrilling’ is the most understated word I can think of to describe it."

King notes, "Simulations and a rapid, iterative approach enabled us to minimize the unknowns and ensure that we had established enough margin that when we ran into a surprise we could continue to have a safe flight test program—and run it with unprecedented efficiency." 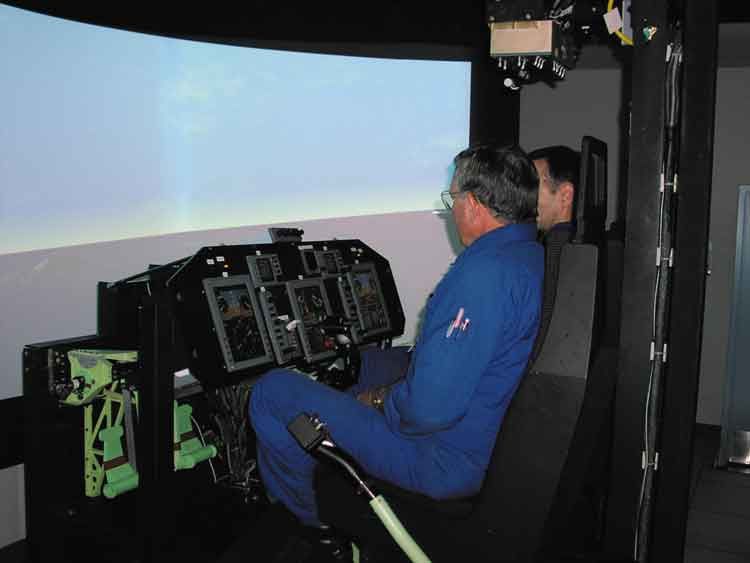 Like a helicopter, the BA609 takes off and lands vertically. Once aloft, the nine-passenger aircraft flies like a turboprop—and at nearly twice the speed of a helicopter. After the mid-air conversion from helicopter mode to airplane mode, which takes about 20 seconds, the BA609 rapidly reaches a cruising condition of 275 knots (509 kph).

With the ability to take off and land without a landing strip, a range of 700 nm (1,296 km), and the ability to fly in icing conditions and extreme climates, the BA609 has many potential uses, from executive transport to oil exploration, search and rescue, and emergency medical services.

The maiden flight of the BA609 tiltrotor launched a long list of aviation technology firsts, including: