how to plot no of events ?

pruth on 9 Nov 2015
⋮
Commented: pruth on 9 Nov 2015
Accepted Answer: Walter Roberson
hi,
i have a mat file(28762*2), in which first column is for date-time with some time interval for duration of 2012 to 1015. and another column is my data where some values are NAN values. here i want a simple bar plot; month vs no. of events.
here m attaching a sample plot. i want the same plot with my data....hope u understand 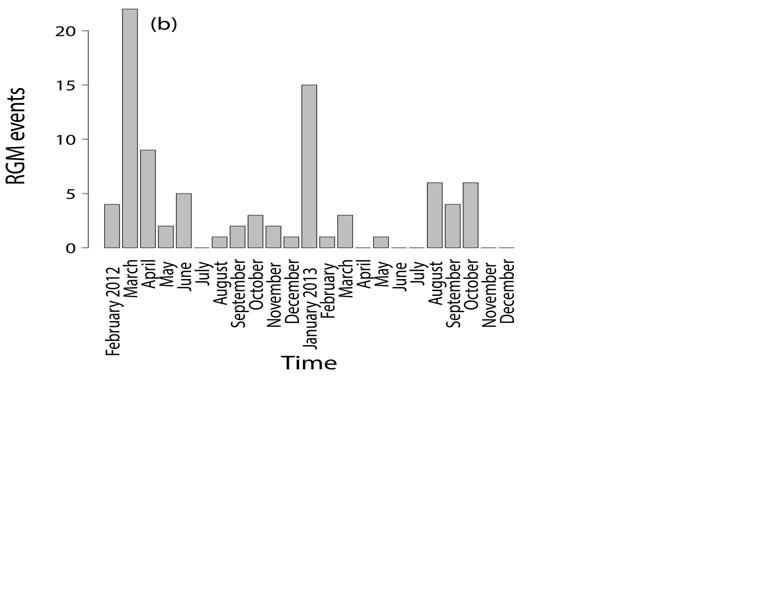 ⋮
Should the entries that are NaN be included or excluded from the counting?

⋮
no ..we dont want NAN . it should be excluded from counting

⋮
could u please explain your code . it works fine but i m not able to understand how it works.first 4 steps i understood .

⋮
accumarray() is a generalized routine that in its simplest form counts events that are numbered as positive integers.
To use it, we transform each date into a small positive integer, starting from 1 for the first month of the first year, 2 for the second month of the first year, 13 for the first month of the second year, and so on. We do that by finding the minimum year out of all of the years used and subtract that from the year of the event to get the number of years since the beginning of the period, and we multiply that by 12 and add the month number.
Once we have the months-since-beginning value, which is stored here in idx, we can count occurrences of each index. accumarray(idx,1) is like
array(idx) = array(idx)+1
except that if there are duplicate idx then each one is counted. Equivalent code for this purpose would be
counts = 0;
for K = 1 : length(idx)
bin = idx(K);
if bin > length(counts)
counts(bin) = 1;
else
counts(bin) = counts(bin) + 1;
end
end
and yet more equivalent code would be
counts = histc(idx, unique(idx));
In short, the accumarray() is being used build the histogram counts.
Once the counts are made, the next couple of lines have to do with building X axis values that datetick() can interpret as dates. The datenum() of the first day of each month is calculated by using some of the properties of MATLAB date vectors. The base year is used for each entry, then the month number is used, and the first day is selected, to construct for example
[2012 1 1
2012 2 1
...
2012 12 1
2012 13 1
2012 14 1 ...]
When datenum() sees the month numbers greater than 12 it knows to push them into the next year, 2013 1 1, 2013 2 1 and so on.

⋮
if u could explain what u did ... i would be easy for me to understand. please explain step by step if can. thank you

⋮
I need to head to bed as I have been up all night and it is 06:15 here. Explaining everything step by step would take a long time to write up. You should start reading documentation about the routines you do not understand.