collapse all in page

Use the varbacktest constructor with name-value pair arguments to create a varbacktest object.

varbacktest (vbt) object, contains a copy of the given data (the PortfolioData and VarData properties) and all combinations of portfolio ID, VaR ID, and VaR levels to be tested. For more information on creating a varbacktest object, see varbacktest.

tl test results, returned as a table where the rows correspond to all combinations of portfolio ID, VaR ID, and VaR levels to be tested. The columns correspond to the following information:

The tl function performs Basel's traffic light test, also known as three-zone test. Basel’s methodology can be applied to any number of time periods and VaR confidence levels, as explained in Algorithms.

The Basel Committee reports, as an example, a table of the three zones for 250 time periods and a VaR confidence level of 0.99. The increase in scaling factor in the table reported by Basel has some ad-hoc adjustments (rounding, and so on) not explicitly described in the Basel document. The following table compares the increase in scaling factor reported in the Basel document for the case of 250 periods and 0.99% VaR confidence level, and the increase in the factors reported by the TL test.

The tl function computes the scaling factor following the methodology described in the Basel document (see References) and is explained in the Algorithms section. The tl function does not apply any ad-hoc adjustments.

The traffic light test is based on a binomial distribution. Suppose N is the number of observations, p = 1 − VaRLevel is the probability of observing a failure if the model is correct, and x is the number of failures.

The test computes the cumulative probability of observing up to x failures, reported in the 'Probability' column,

where is the cumulative distribution of a binomial variable with parameters N and p, with p = 1 − VaRLevel. The three zones are defined based on this cumulative probability:

The probability of a Type-I error, reported in the 'TypeI' column, is .

The increase in scaling factor, reported in the 'Increase' column, is always 0 for the green zone and always 1 for the red zone. For the yellow zone, it is an adjustment based on the relative difference between the assumed VaR confidence level (VaRLevel) and the observed confidence level (x / N), where N is the number of observations andx is the number of failures. To find the increase under the assumption of a normal distribution, compute the critical values zAssumed and zObserved.

The increase to the baseline scaling factor is given by

with the restriction that the increase cannot be negative or greater than 1. The baseline scaling factor in the Basel rules is 3.

The tl function computes the scaling factor following this methodology, which is also described in the Basel document (see References). The tl function does not apply any ad-hoc adjustments.

[1] Basel Committee on Banking Supervision, Supervisory Framework for the Use of 'Backtesting' in Conjunction with the Internal Models Approach to Market Risk Capital Requirements. January, 1996, https://www.bis.org/publ/bcbs22.htm. 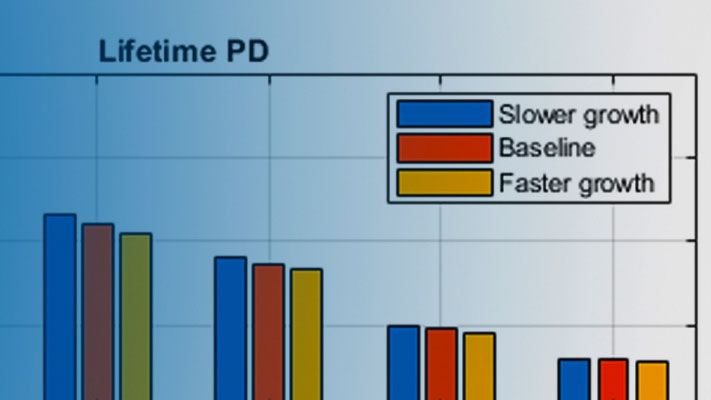