The distinctive bikes for Olympic short-distance track cycling resemble blades. Each bicycle must be as strong, light, and efficient as possible while also adhering to international standards that include a minimum weight. Every one-thousandth of a second counts for athletes maneuvering around the bowl-shaped wooden 250-meter (820-foot) track at speeds over 70 kilometers per hour (43.5 miles per hour). 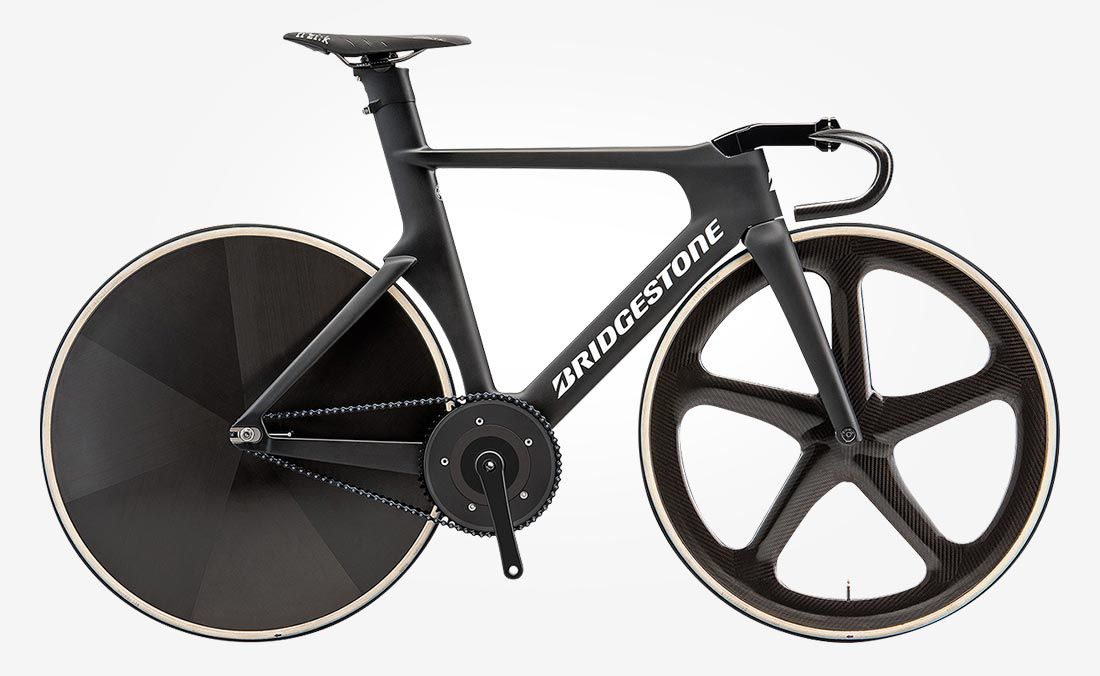 JCF signed an agreement with a joint team from Bridgestone’s Fundamental Technology Division and Bridgestone Cycle’s Race Equipment Design Division to develop the sprint bicycle. Carrying riders to record-breaking victory requires uniting areas of expertise in components such as the wheels, frame, and handlebar, as well as in equipment handling and responsiveness.

Unlike longer races, short-distance races require bicycles equipped for sudden acceleration and powerful pedaling. The bike frame is key to both. Frame stiffness and weight are critical in the ultra-competitive cycling world. A frame that flexes too much lowers pedaling efficiency. Too heavy, and the rider gets weighed down, losing precious time. Every country with a cycling team in the Olympics is in hot pursuit of finding the ideal balance of weight and rigidity.

But even the stiffest, lightest bicycle possible that still meets the 6.8-kilogram Union Cycliste Internationale (UCI) minimum weight regulation won’t necessarily be a winner. It has to feel right. The Bridgestone team set out to achieve that ideal combination.

The team worked with MathWorks Consulting and the Advanced Support team to simulate the motion of a bicycle on a velodrome track using Model-Based Design. This sophisticated, data-driven analysis helped accelerate prototype development and optimize an advanced sprint bicycle for elite high-speed racing on the world’s stage.

The Bridgestone team focused on short-distance events: individual sprint, team sprint, and keirin. Japanese for “racing wheels,” keirin is a unique type of track cycling that began in the late 1940s. A motorbike called a derny sets the riders’ pace, increasing speed around the track for several laps and then departs so the athletes can battle it out over the final few laps. Keirin became an Olympic event in 2000 for men and in 2012 for women.

Similar to keirin, athletes competing in the individual and team sprints typically finish at speeds exceeding 70 km/h (43.5 mph). Top riders close in on 80 km/h (49.7 mph). A standard track has a maximum angle of 45 degrees, which is the case at the Izu Velodrome in Izu City, Shizuoka Prefecture, the track cycling venue for the delayed 2020 Olympics.

“[By working with MathWorks Consulting and support,] we were able to avoid many difficulties that we would have faced if we had done this on our own.” 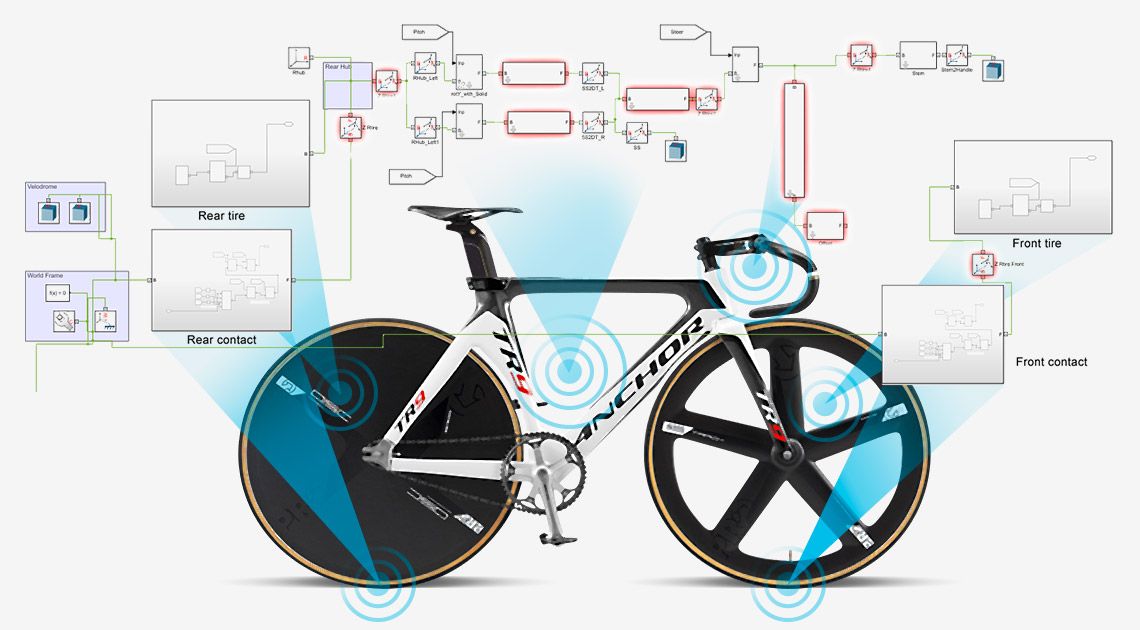 Modeling a bicycle zipping around the oblong angled track was essential for the Japanese team. Despite a velodrome’s highly controlled environment, the engineers found themselves in uncharted territory. “There was no existing measurement system to accurately capture the behavior of this moving object: the three-dimensional behavior of the frame, steering, and wheels,” Uchida explained.

A commercial system for measuring motorcycle movement would have been too heavy and outsized for lightweight indoor track bicycle development. Plus, the feeling of riding a motorcycle is much different from that of being on a racing bike. The resulting design would have been off.

Traditional technologies had limitations, too, according to the Bridgestone team. Motion capture could only measure within an extremely narrow range and involved extensive preparation for implementation. A gyro sensor risks producing significant integration errors. Global positioning system (GPS) information, while effective for integrated error correction, wouldn’t work properly indoors at the track.

The team needed to develop an entirely new motion measurement system that could precisely model the behavior of a track racing bicycle in action. Correcting for bike direction involves accounting for complex signals—true acceleration, centrifugal acceleration, gravity—while simultaneously providing a clear breakdown of these signals and an accurate classification of each one.

For this, the team turned to one of the best-known algorithms for state estimation, the Kalman filter. The Kalman filter takes measured data and filters out the noise to accurately estimate the state of a system. This algorithm is ideal for real-time systems where the current state is continually changing, such as a bicycle traveling around a banked track.

In order to estimate bicycle behavior using the Kalman filter, the Bridgestone team had to obtain unobtrusive signal data. Small inertial measurement unit (IMU) sensors that can detect changes in pitch, roll, and yaw have evolved remarkably in recent years, Uchida observed. So, the engineers deployed 25-gram (0.88-ounce) IMU sensors. The tiny sensors meant JCF cyclists could test-ride prototypes in the velodrome without even noticing the devices were there.

The team also needed to incorporate the velodrome’s shape into the Kalman filter equation of state for a kinematic model. The team captured the curved track with lidar, which produced a three-dimensional point cloud. Once a mathematical model of the velodrome shape was constructed, the team used MATLAB® to identify its parameters. The team simulated bicycle motion and tested system-level performance with MATLAB and Simscape™. The team built a kinematics model of the sprint.

With the behavior measurement system ready, the team compared the performance of various bicycle prototypes and other companies’ products, Uchida said. They analyzed how the bicycle behaves in crucial racing scenarios on the track and adjusted the design based on those insights. This modeling and simulation led the team to formulate a design plan quickly and avoid spending time on unnecessary prototype development cycles.

“The MathWorks team provided us with modeling suggestions that hit the nail on the head,” Uchida said. “They have a fantastic amount of know-how about widely used technologies. We were able to avoid many difficulties that we would have faced if we had done this on our own.”

In the past, prototyping entailed making repeated minor modifications to the design based on rider feedback, Uchida said. For the new short-distance track racing bicycle, however, the team aggressively adopted Model-Based Design. The iterative system-level simulations considerably sped up the development cycle.

“We were able to identify critical riding scenarios by analyzing the bike’s behavior using the Kalman filter,” Uchida said. Then the team rapidly finalized the aerodynamic and stiffness design aspects of the bike using compound fluid dynamics modeling and the finite element method, a mathematical technique for quantifying physical phenomena.

JCF athletes tested the new system on the indoor track. “I asked them to ride the bike with the measurement system in place and provide feedback on how the bike behaved in important scenarios,” Uchida explained.

During the final stretch, the team tapped tools more commonly used for car design and applied them to two-wheel product development. The Unreal Engine® from Epic Games enables creators across industries, including the automotive and transportation sector, to render simulation results using real-time immersive visualization. The Unreal Engine simulation environment enabled the team to visualize the driving algorithms designed with Simulink®.

“The realistic [simulation] video allowed the people around us to truly understand the technology that we had created.”

3D simulation and visualization of a bicycle using the Unreal Editor in Simulink.

The interface between Simulink and the Unreal Engine showed the Japanese team’s full sprint bike development in a new light. “The realistic video allowed the people around us to truly understand the technology that we had created,” Uchida said.

The latest sprint bicycle design differed from the initial prototype significantly, Uchida added. “We created a much lighter, more aerodynamic, and sufficiently rigid bike,” he said.

The real-world results are impressive. In May 2021, Japanese cyclist Eiya Hashimoto, racing on the Bridgestone frame, won the gold medal in the Men’s Omnium at the TISSOT UCI Nations Cup in Hong Kong. In August, Yumi Kajihara won the silver medal in omnium track cycling at the Izu Velodrome, becoming the first Japanese woman to win an Olympic track cycling medal.

Now that the sprint racing bike has passed the ultimate test, Uchida said that their team plans to take all the knowledge gained from the development process and apply it to producing a new road bike. Specifically, they have their sights set on advancing Bridgestone bicycles known as all-rounders that are built for reliable, versatile road performance.

“We plan to sell an all-rounder bike that combines aerodynamics, rigidity, and lightness at the highest level,” Uchida said. This means that bicycles designed using advanced modeling and simulation technologies that maximize performance can become more widely accessible. Whether cyclists in the future race around indoor tracks, climb steep hills outside, or cruise flat urban terrain, they’re in for incredible rides.

Decoding Butterfly Flight with High-Speed Cameras and a Wind Tunnel

Energy Storage for a Renewable-Powered World

Making Oxygen from the Martian Atmosphere