Christian Brans on 22 Feb 2022
⋮
Answered: Alan Weiss on 23 Feb 2022
Hello
I am completly new to any form of optimization, so please excuse me if my question is stupid. I am overwhelmed by the many different ways of achieving an optimization and I have no idea whicht is the right one for my problem.
For my master thesis I measured the bending of a beam at four sepearte points on said beam. I converted them to Matlab as a 4x2 vector includung the x-coordinate of said point (constant) and the measured bending in relation the the unbend beam as the z-coordinate (variable).
To verify the results I wrote a beam bending model (based on the standard Euler beam) using the ode45 solver. The results are looking good, but my professor still asked me to run an optimization to fit the model better to the measured data.
The problem is that my code calculates the bending of the beam while I measured the

of the bending in my experiment. I then substracted the the two ODEs from each other to gather said

from my model. What I need to do now, at least in my head, is to optimize said

. For that I have two variable parameters in my model but like I said in the beginning I have no idea which optimization routine is the best to choose, especially since I don`t use my ODE-solver results but a Δbetween them.
Could you suggest me a routine for me to try?
I have attached the plot of the model and the experiment data for a better understanding. First picture shows the calculated bending for the unbend case (y0) and the first bending case (y1) caused by extending the beam. The second picture shows the Δ of the two results as well as the measure points. 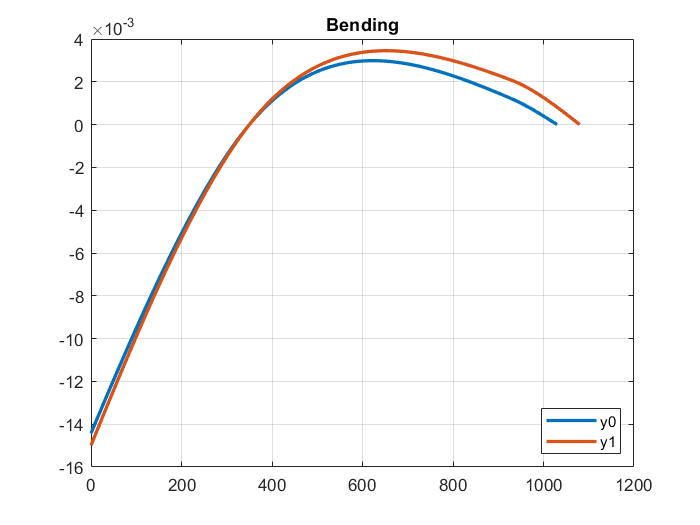 ⋮
Edited: Torsten on 22 Feb 2022
Here is the link to a code that should explain how to proceed:
https://de.mathworks.com/matlabcentral/answers/43439-monod-kinetics-and-curve-fitting
You will have to couple "lsqcurvefit" and "ode45" as shown.