"With Simulink and Simscape Driveline we reduced the time required to build a mechanical model of a transmission by six weeks, and we're positioned to build the next one even faster. As a result, we are better able to support several different customers because we can get into their world much quicker." 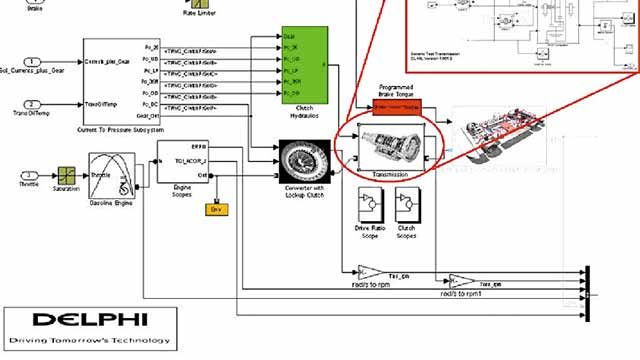 As a tier-1 powertrain control supplier, Delphi Powertrain Systems must fulfill the diverse needs of a broad and demanding customer base. To meet this challenge, Delphi engineers use MathWorks tools to develop control algorithms, model powertrain mechanics, and verify the real-time capabilities of their control systems.

"We need to be very flexible in applying our control systems to the different powertrain hardware architectures that our customers are using," says Andrew Herman, Staff Engineer-Forward Transmission Algorithms at Delphi Powertrain Systems. "With Simulink and Simscape Driveline, we can model those hardware architectures very efficiently. We can rapidly build a physical model of a new customer transmission and validate our control system with hardware-in-the-loop tests."

Delphi engineers were tasked with developing production-intent transmission controls for six-, seven- and eight-speed transmissions. "Transmissions require very sophisticated controls, and practically every one we work on is unique," says Herman. "As we move to transmissions with more gears, the shifts get shorter, demanding much finer control to optimize fuel economy, emissions, and drivability."

Delphi had previously developed a Simulink model of a four-speed transmission that worked well but could not easily be adapted to transmissions with more gears or to diverse mechanical architectures.

Delphi needed to quickly build a mechanical model for each new powertrain based on high-level information provided by OEMs and hardware vendors. They would use the models to customize, refine, and validate their control algorithms.

Delphi engineers used MathWorks tools for Model-Based Design to design control algorithms, model transmission hardware, and conduct hardware-in-the-loop (HIL) tests. They used MATLAB®, Simulink®, and Stateflow® to develop and simulate the algorithms. Simscape Driveline™ provided baseline components that they could use to quickly develop plant models that incorporated the transmission’s tier and clutch arrangements and the mechanical structures specified by the OEMs.

Initially, the team used Simulink to develop a model of a four-speed transmission based on complex boundary conditions and state equations that govern the physics of the transmission. "With Simscape Driveline the transitions and boundary conditions are taken care of naturally by the physical model, which greatly simplifies the model," says Quan Zheng, Lead Engineer at Delphi.

The team then ran simulations in Simulink to verify the functionality of the controller and its interaction with the physical model. Fixed-Point Designer™ enabled them to identify and correct range, resolution, and truncation issues in their control systems.

Using Simulink Coder™, they automatically generated code for the physical model and for several controller algorithms. They ran HIL tests using this code to verify the real-time operation of the controller. The tests were run on Opal-RT RT-Lab TestDrive hardware.

"With Simscape Driveline we can rapidly assemble a model from high-level specifications," Herman says. "We can then validate the controller and its calibration in the real-time simulation environment, and acquire solid data to project how the control system will perform in the vehicle on real hardware. Through HIL simulation, we are using Simscape Driveline as a production validation and analysis tool."

Delphi is currently developing more advanced controller algorithms, which they will continue to validate against new transmission models built with Simscape Driveline. This approach will enable Delphi to increase its control algorithm and diagnostic test capability in the simulation and HIL environments for validation of controller hardware. Delphi is also developing more transmission plant models with Simscape Driveline to evaluate control system trade-offs and the reuse of control strategies for different transmission architectures.