Differential Equations and Linear Algebra, 1.6b: Integrating Factor for a Varying Rate, a(t)

The integral of a varying interest rate provides the exponent in the growing solution (the bank balance).

OK? I want to talk about a slightly different way to solve a linear first-order equation. And if you look at the equation-- I'll do an example. That's the best. Do you notice what's different from our favorite equation? The change is 2t. The interest rate a is increasing with time, changing with time. So we still have a linear equation, still just y. But the coefficient is varying. We have a variable coefficient 2t.

And if we think here of applications to economy, to banks, that would be rampant inflation, the interest rate 2t climbing and climbing forever. But we want to see that this is a class of equations that we can solve. OK. And the new method is called an integrating factor. It's a magic factor that makes the equation simple. So that's another nice way to solve all the problems that we've dealt with so far, plus this new one.

And on the right-hand side, I have the integral from 0 to t of I times q. So I'll put in-- yeah, e to the minus s squared q of s ds. I've introduced a variable of integration s going from 0 to t. You remember this type of formula? The input is continuous over time, and I'm looking at the resulting output at time t. So all the inputs go in. They're all multiplied by some factor and integrated gives the total result from those inputs.

Well, let's look at it. I have y of t. This is what comes out of y of 0. You see that the growth factor has changed from our old e to the at-- that was the growth at constant rate, interest rate a-- to e to the t squared. That's our growth from an increasing interest rate.

So that's the formula for the answer. If you give me any particular q of s, I just do the integral, and I find the solution to the differential equation. So that integrating factor has made things work.

But now I want a formula just to close off the entire case of varying interest rate. I want to find the solution to that equation. And it is-- so here's the integrating factor. It's e to the minus because of that minus sign. Now I'm wanting a to come down when I take a derivative. So what I'll put up here, the integral of a of t dt, say, from 0 to t.

Now, let me just do again this example just to see. I have e to the minus the integral of 2t, which is e to minus t squared. That's how I get t squared as the right choice for our example. And the general rule is there. That's the integrating factor.

And finally, finally, if a is a constant, which is the most common case-- the only case we've had until this video-- if a is a constant, then the integral of a from 0 to t is just a times t. So number one example, number zero example, would be e to the minus at. That would be the correct integrating factor if we had constant a.

And I'll create some examples, some problems, just to go through the steps in that best case of all with constant integrating factor. But now we can solve it with a varying interest rate. Good. Thank you. 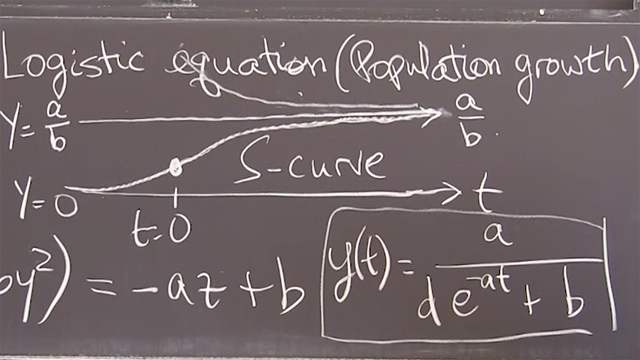