Use Model-Based Design to model and simulate the control laws, trace requirements to the model, and generate and verify 16,000 lines of code

“With Model-Based Design we had a successful first flight; there were no issues from a control or integration standpoint. Generating the control law code from our Simulink model with Embedded Coder eliminated the slowdowns caused by manual code generation and freed the team to work on meeting the broader program goals.” 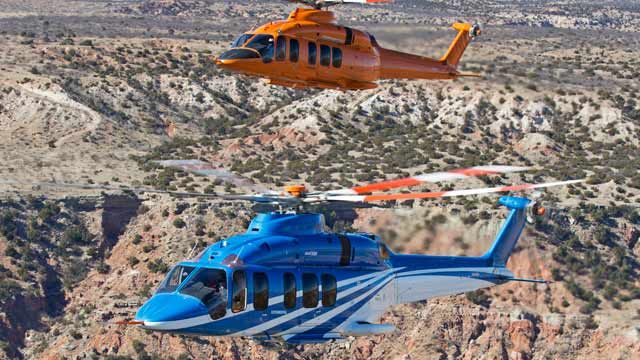 Bell Helicopter used Model-Based Design to develop and implement the control laws for the Bell 525 fly-by-wire system. The project was the first time Bell Helicopter engineers used automatic code generation for a DO-178B Level A workflow.

“We did all the design and extensive simulations in Simulink,” says Mike Bothwell, Bell 525 fly-by-wire control law lead. “The first time we generated code for the real flight control computers with Embedded Coder, we had no integration problems. That was a big deal because, on previous projects, integration problems really slowed us down.”

For Bell, being the first to market with a civilian helicopter equipped with fly-by-wire flight controls meant speeding up the slower aspects of its DO-178B software development process by reducing both manual coding and manual code reviews. On past programs, a small manually coded design change would lead to a detailed review process that took too long to support an aggressive flight test development program.

The Bell 525 engineering team wanted to capture improvements over their previous DO-178B development approach. First, they sought to reduce the rework that resulted from manually coding the software requirements. Second, they wanted to streamline the steps needed to integrate code with the rest of the aircraft systems. Third, they wanted to establish a robust development process so that engineers could provide consistent results to other teams and projects.

Working in Simulink® and Stateflow®, the Flying Qualities Engineers developed a control law model based on 900 high-level system requirements defined in IBM® Rational® DOORS®. The model was partitioned into modules that included pitch, roll, and yaw axes, as well as a logic and mode switching module developed with Stateflow.

They developed a set of test cases and ran simulations in Simulink to verify logic and functionality.

Using Requirements Toolbox™, the engineers linked the requirement definitions in DOORS with the Simulink and Stateflow objects they had used to model the requirements. This traceability enabled the team to perform an impact analysis to identify areas of the Simulink model that would be affected if requirements were updated later in the project.

They also used Simulink Check™ and Simulink Coverage™ to check the modules for compliance with Bell Helicopter modeling standards for DO-178 and to measure model coverage for the test cases. While the coverage analysis is not required for certification credit, it plays a part in the certification process because it helps the team trace low-level tests to high-level requirements.

The team used Simulink Report Generator™ to generate design and requirements tracing reports that can be used for guidance during the review process required for certification.

By using Simulink Code Inspector™ and qualifying it with DO Qualification Kit, the team ran automated comparisons of the generated code and the control law model to check for unsupported blocks, verify traceability, and satisfy DO-178B code-review objectives.

After code review, the code was compiled and tested using the same test cases as the Simulink model. The software team then integrated the control law code with the other flight control code in preparation for “live” system testing.

The Bell 525 Relentless had a successful first flight and the helicopter is undergoing flight test development to its full speed, weight, and altitude capability. Bell Helicopter is expanding its use of Model-Based Design to future DO-178C projects.