Use Model-Based Design to design and simulate the controller, prototype hardware, and generate real-time control code

“We completed the prototype in just three months with Model-Based Design. We saved months of development time by using an integrated environment to model the controller and the physical system, simulate them together, generate code, and create a real-time hardware prototype that worked flawlessly.” 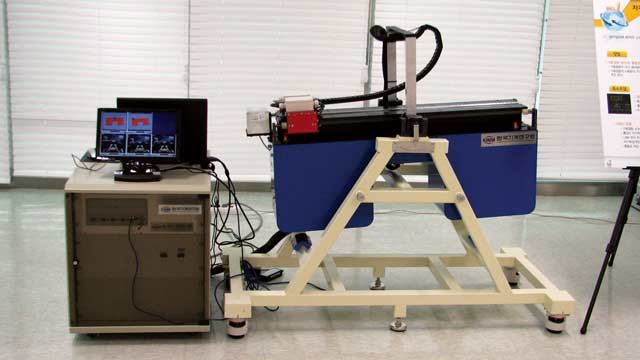 Korea is investigating the feasibility of mobile harbors: platforms that enable the unloading of container ships near cities that do not have deep-water ports. The challenge is to stabilize the platform in ocean waves so that containers can be unloaded safely and quickly.

Researchers at the Korea Institute of Machinery and Materials (KIMM) developed a small-scale prototype of an antirolling system to evaluate the feasibility of using maglev and active mass driver (AMD) technology to stabilize mobile harbors. The system slides a mass side to side to counteract the force of the waves. Researchers designed and implemented the prototype’s controller using Model-Based Design.

“Using Model-Based Design, we optimized the design and accurately predicted how it would perform,” says Cheol Hoon Park, senior researcher at KIMM. “After simulating the controller model, we moved directly to hardware implementation, confident that we had the best design.”

KIMM researchers needed to evaluate the antirolling system for a catamaran-based mobile harbor platform. The system required two complementary controllers. The first manages the gap between the magnets and the rail in the maglev subsystem, taking input from a gap sensor and sending control signals to the maglev current driver. The second positions the mass, taking input from tilt and mass position sensors and sending control signals to a linear drive motor.

KIMM projects typically take one to three years, but the antirolling system had to be completed in just three months. “With the aggressive schedule, we had time for only one prototype, so the design had to be right the first time,” says Park. “Also, there was no time to integrate disparate modeling and simulation tools for the controller and the physical system.”

KIMM used MATLAB®, Simulink®, and several other products to design, simulate, and implement real-time controllers for the antirolling system and demonstrate a working prototype.

Park converted a SolidWorks assembly of the mobile harbor platform into a Simscape Multibody™ model comprising a one-meter-wide cross-section of a scaled-down version of the catamaran. Park used Simscape Multibody to model the AMD system.

Simulations of the AMD system model enabled Park to determine how much mass would be needed to counteract the catamaran’s motion.

Park developed Simulink models of the maglev and AMD controllers. He then performed closed-loop simulations using the catamaran model to verify the functionality of the control algorithms.

Using Simulink Design Optimization™ and Optimization Toolbox™, Park tuned design parameters, including the speed of the AMD and the size of the linear motor, to improve system performance.

“Simulations in Simulink and Simscape Multibody showed that the mass didn’t need to move as quickly as I had thought, so I revised the specification for the linear motor,” says Park.

Park used a simulation of the optimized design to show managers and stakeholders at KIMM how the system would perform before it was implemented in hardware.

He used Simulink Coder™ to generate C code from the Simulink controller models. He executed the code in real time using Simulink Real-Time™, which ran on a PC/104 computer with an I/O board providing the analog-to-digital and digital-to-analog interface to the prototype catamaran hardware.

Experiments with the prototype showed that it would be difficult to generate enough power to drive the mass required on the planned mobile harbor. However, KIMM researchers also learned that the stabilizing technology worked, opening opportunities to commercialize it for smaller vessels, such as yachts and cranes, and for bipedal walking robots.

Learn more about Korea Institute of Machinery and Materials